Holidays Around the World: Part 2

I know that in many parts of the world folk are winding down for Christmas but it's a very different story here in Israel.  We Celebrated Hanukkah, the Jewish Festival of Lights, last week with candle lighting, presents and yummy fried food.  Now we are back to routine and life has returned to normal.  No frantic shopping for us or huge meals to cook.  Well actually, Jewish people tend to make huge meals every single week -  for the Sabbath meals -  so the cooking meals part doesn't count!

Hanukkah is celebrated for eight days and marks the victory of a group of Jews called the Maccabees over the Syrian Greeks, the most powerful army of the ancient world.  At the end of a three year war the Maccabees recaptured Jerusalem and lit the seven-branched candelabrum, the Menorah, in the rededicated Holy Temple.

Nowadays Hanukkah is celebrated by lighting one additional candle on the Hanukkah (an eight-branched candelabrum similar in stlye to the one in the temple) each day to remind us of a great miracle that happened long ago.  After the Maccabees defeated the Syrians and chased them out of Jerusalem, the Jews wanted to light the Temple Menorah again but there was one problem; there was only enough oil in the Temple to last for one night, yet it continued to burn for a full eight days, the length of time it took to press, prepare and consecrate the fresh olive oil.
When we light the Menorah and sing the traditional Maoz Tzur (Rock of Ages) song it is to remember this miracle.


Because Hanukkah celebrates the miracle of oil, it is traditional to eat fried foods such as latkes and sufganiyot during the Holiday.  Latkes are pancakes made out of potatoes and onions which are fried in oil.  Sufganiyot are jam filled donuts that are fried and dusted with confectioners' sugar. 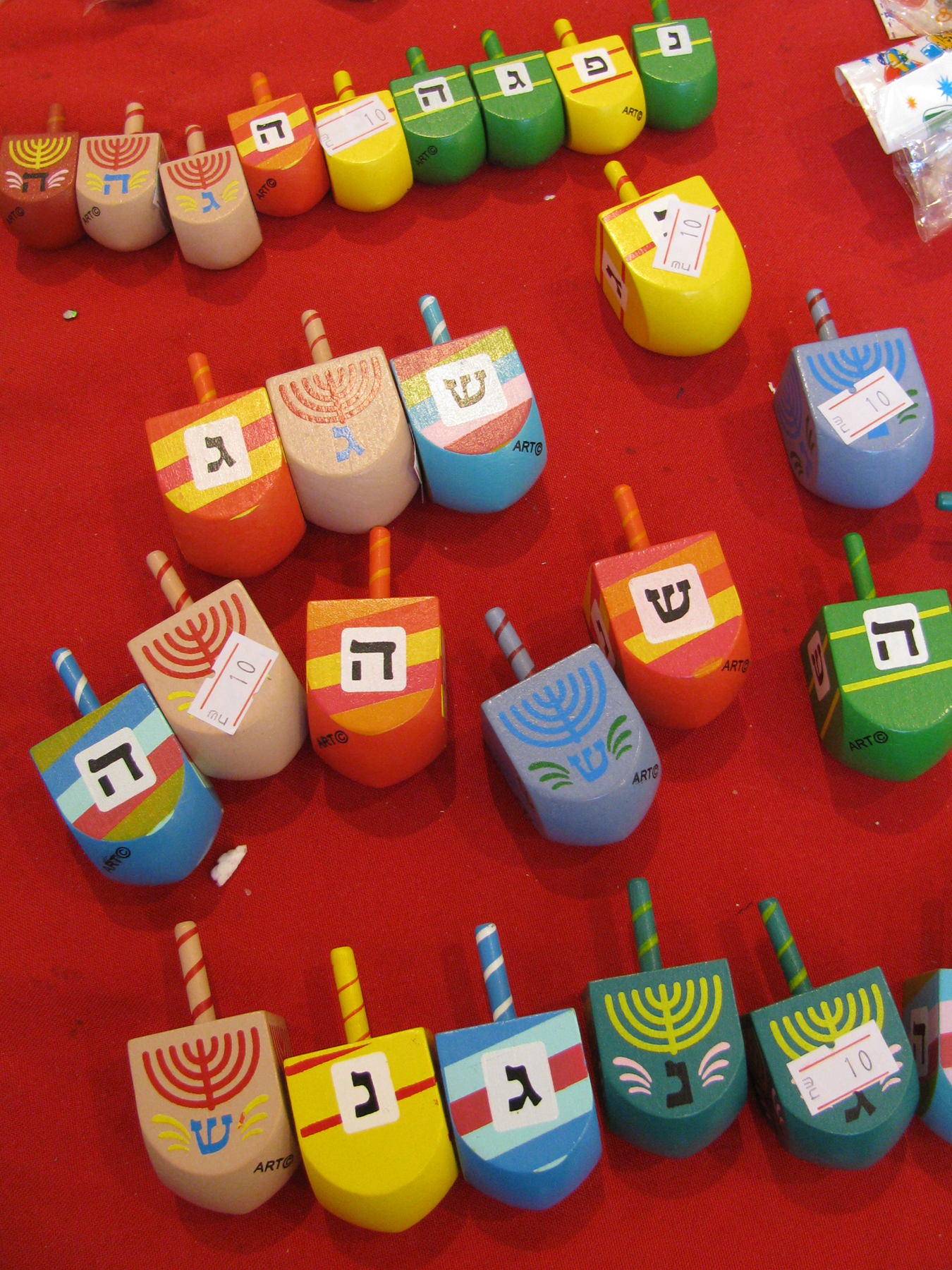 As a part of the Hanukkah tradition, we also play a game using a dreidel.  The dreidel is a four-sided spinning top with a different Hebrew letter on each side.  The four letters which appear on the four sides of the dreidel allude to the miracle of Hanukkah.  They spell out:  Nes (N-miracle), Gadol (G-great), Haya (H-happened) and Po (P-here, meaning in Israel).  "A great miracle happened here".  Outside of Israel, the letter Shin (S- there) replaces the Po (P-here).


All these traditions give significant meaning and importance to the festival, and add a little weight on the scales too!

Etsy Expats
Here we are, miles away from where we started. Some of us have found homes away from home, others are packing bags and filling up boxes before the big move. Others still have gone back to their roots after spells abroad or are just dreaming of starting anew.

The Etsy Expats are a team of talented creative artists, running their shops in countries all over the world, often not their own.

Being an expat, means not always having the luxury of taking things for granted, such as knowing exactly where to go to get your tools - if you even know what they are called - or how to set up a company in a foreign country, or simply have your nieces model your latest jewelry.

Still, living abroad can be mind-opening. Your culture merges with another, your perception shifts and you get to enjoy the best of both worlds – the old one when you visit and the new one when you take advantage of being the guest. Undoubtedly the influences of your new milieu will not only enrich your outlook on life, but also stimulate your creative genius. The fact that many members of the Etsy Expats team have opened their Etsy shops AFTER becoming expats attests to that.